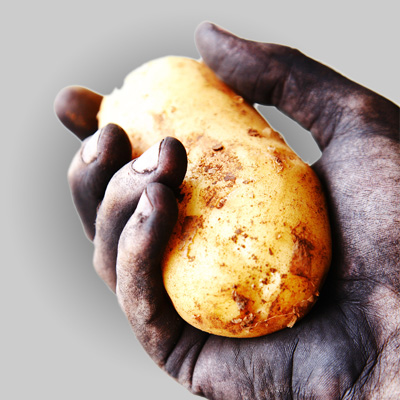 Originated in South America, potato was introduced to Europe by the Spanish conquistadors in 1535. Having been a revolutionary food for the past 500 years, potato is an amazingly popular vegetable that has become a strategic and staple food for humanity.

Potato, by its very nature, is suitable for long-term storage. Although it is still stored in primitive storage and caves, these methods lead to spoilage.

Seed potatoes need to be stored differently as other potatoes are put through a chemical process in order to avoid germination while storing. Preserving potatoes are similar to onions, as all root plants need to be dried before they are put in storage.

After drying, potatoes bruised during the harvest or handling, are cured in order to prevent rotting and help healing of the cut skin. After this stage, potatoes are prepared for cold storage by lowering the temperature by 0.5 °C per day. Seed potatoes are best stored in cold store maintained at 2-4°C while other types at 4-10°C.

However, controlling carbon dioxide is also important as much as cold room temperature and humidity control in cold storage. Increase in the level of carbon dioxide should be controlled and kept within certain limits.

To prevent condensation, potatoes should be prepared by increasing the temperature by 1°C, before they are taken out of the storage to be put on the market.

The best method of storing potatoes is the modern storage technique that includes the stages of drying, curing, cooling, storing and preparing for the market.It is estimated that only 50 million tonnes of the 300 million tonnes of global potato production are kept with this kind of storage method.